Soulmate Predictor is mankind's only method of measuring life-long compatibility, TRUE love and soulmates. Its revolutionary numeric system is the ONLY method of gauging relationship compatibility with infallible accuracy.

Soulmate Predictor is the only method able to:


Since its introduction, Soulmate Predictor has become the the world's foremost authority for:


With birth information being the only input, Soulmate Predictor is immune from the flaws of all question and answer (and all other) compatibility measurement methods. As the two parties being compared need never interact or answer questions of any kind, anyone can check their actual (not just fantasy) compatibility with their favorite celebrities, sports heroes, historical figures, classmates, or the cutie pie working at the cash register, etc.


There are no chart wheels or astrological symbols, and traditional astrology's 5 to 25 pages of confusing personality report are replaced with a more accurate and understandable format less half the size of your computer screen.

The Points of Attraction and LAFSAD tables


Some benefits and features

The user is advised of the amount of life-long harmony and discord present within all areas of their relationship. They must use their maturity and common sense to decide whether the overall picture is a relationship worth entering into or continuing with.


In almost every comparison, glancing at just two values – the Potential for Compatibility and Strife values – are enough to instantly gauge romantic or life-long compatibility.


"The bigger the values the better – everywhere except for the 3 SAD values" is the only knowledge required to understand and use the software. To make the complex overall assessment even easier to understand at a glance, the information is color coded for relative desirability.


No astrological knowledge is required, and technically, all references to it could be deleted – but astrological savvy users gain a deeper understanding of the comparison from the references and features which have been included. 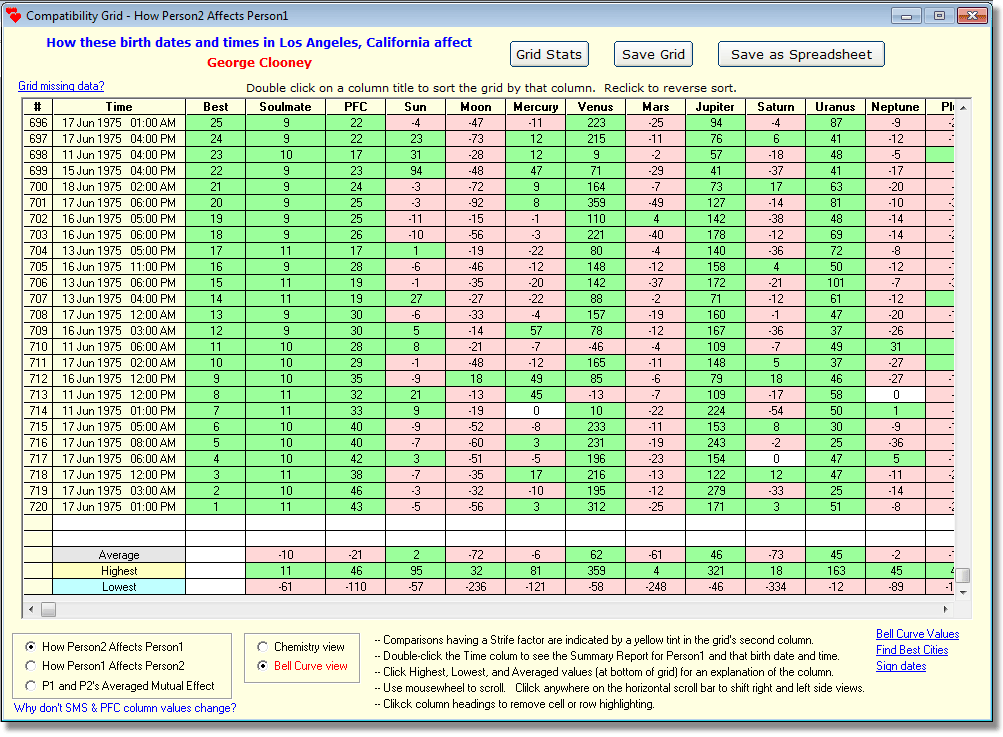 
If the user's birth time is known and as little as the other person's age and astrological sign of is known, the algorithm can still measure and predict – within a range narrow enough to make an intelligent decision – their degree of mutual compatibility in a long-term relationship. If neither person's birth time is known, the range of compatibility will be much broader – but still much faster and more accurate than any other compatibility measurement or relationship advice method.


Most measurement methods set upper and lower limits on the scale of possible compatibility (such as "29 out of 100" or "7 out of 10 stars"). Yet, the only way to accurately measure a relationship's compatibility is by using a fully open-ended scale/number line of positive and negative values. Using the Bell Curve values enables Soulmate Predictor to do this. 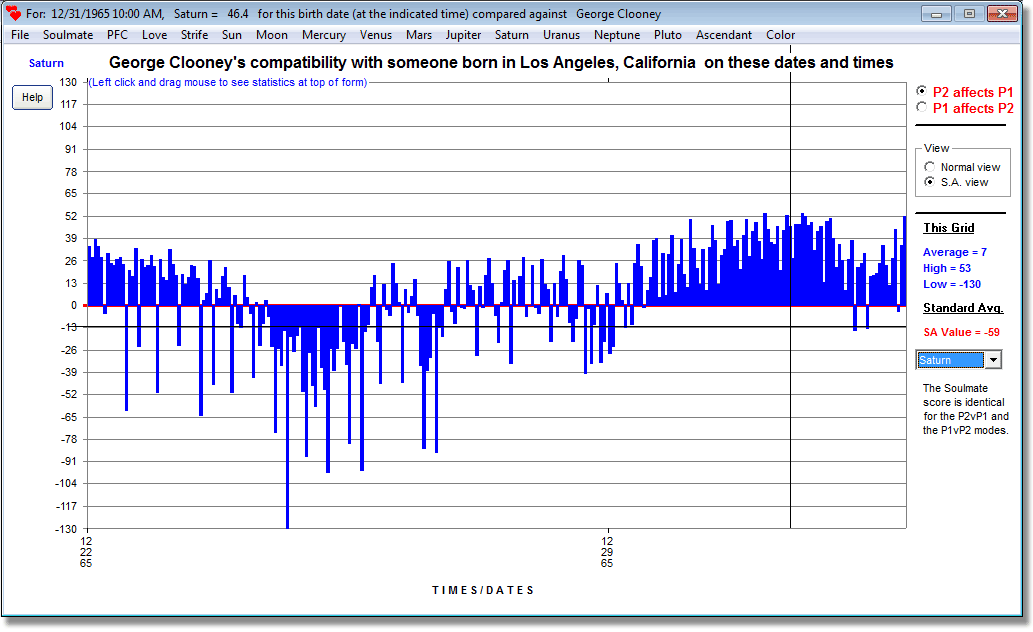 
Soulmate Predictor can only measure the quality of a relationship after the new wears off and the parties have stopped putting their best foot forward with each other. For new relationships, its accuracy becomes apparent at the rate at which each person stops being on their best behavior with the other person.

Because most relationships fall towards the center of the compatibility bell curve, Soulmate Predictor's precision is most readily apparent when measuring relationships falling at either the low or high ends of the compatibility spectrum. The Soulmate Predictor processes allows highly compatible people to be located and highly incompatible people to be avoided.


If every human could find their most compatible possible partners, the number of adverse romantic (and platonic) relationships would be reduced. Because the Soulmate Predictor process allows both people to immediately know their life-long compatibility in advance, it makes all incompatible first dates and ill-fated relationships obsolete. Couples in committed relationships would know their true chances of "till death us do part" and be able to make intelligent decisions about their future based on that knowledge.


Most humans older than puberty crave answers to two potentially life-altering questions and only the Soulmate Predictor process can provide them. These are: "How long-term compatible are me and Person X?" and "Romantically, who is my most mutually compatible person(s)?"

There is no faster, easier, less invasive or more accurate method of doing what Soulmate Predictor is designed to do. The process holds the potential to change, within a single generation, how friendship, romance and love are conducted – worldwide. In the metaphysical sense, there is no faster, easier, less expensive way to raise the planet's vibrations than by utilizing it as far and wide as possible.

Very important: Whether in marriage, business, creativity, study partners, friendships, or simply lifting bulky physical objects, pairing people who are most closely on the same wavelength is a multiplying force in achieving their mutual goals.


What if today's budding John Lennon could be paired up with his most mutually compatible possible counterpart(s).... and the budding McCartneys, and Teslas and Jobs theirs.... and so forth for every human on the planet – from grandma in her kitchen, to a garage inventor, to a kid in a Mumbai computer café.... to you?


Globally, the achievement speeds of humanity's creativity, inventions, and academic and humanitarian goals would be slashed.


The major social media companies have independently shown that the number of friends of friends between any two humans is only from 3 to less than 5 people. Limited research indicates that roughly 1 in 100 people would make acceptably harmonious partners and about 1 in 200 people would make highly compatible ones (although some individuals can have significantly higher or lower ratios than this).


These ratios may not sound significant, but the number of new, interactive acquaintances the average person makes every year is perhaps between 5 and 10 (or less). Even using the dating and social media sites, how many years would it take for the average person to interact with 100 new people to the extent that their mutual compatibility can be gauged?


For romantic purposes, filtering for partners within a certain age range, relationship status, gender and orientation, geographical distance and appearance reduces the number of highly compatible partners from 1 in 100-200 to 1 in possibly a great many thousands.


As Soulmate Predictor reveals everyone's most compatible birth dates and times, the sole obstacle to radically altering global society is matching that birth information to actual human beings. Soulmate Predictor's potential can only be unleashed by connecting it to the Internet where finding that "1 in a great many thousands of people" becomes infinitely easier.


Transforming how the world finds bonafide true personality compatibility and soulmate level love is as simple as a free Compatibility Database website/app. It would be a hub for anyone to find and contact their most highly compatible partners for social, business or romantic purposes.

"Who is the most compatible person with me in my school (or corporation), city, county, state, country and planet?" Anyone who can't answer those questions will have an interest in joining the database. Membership requires only a user name, (un-displayed) contact email, and birth info. There are no "matchmaking" questions and optional profile text and photos play no part in compatibility matching. The Soulmate Predictor process can only calculate for mutual compatibility.


Members immediately know their compatibility with all other members in ascending and descending order. They can filter the database for the most highly compatible ones who are geographically close, within a certain age range, and matching any personal attributes (religion, politics, interests, physical description, etc.). Compatibility assessments can be expressed in from as little as 1 to 3 numbers.... or be as detailed as the dozens in the Soulmate Predictor software.


Existing member's "Most Compatible" or "Least Compatible" person worldwide is subject to change at any moment with the joining of each new member. Who isn't curious about who is currently the most compatible known person on the planet with them self? At any given moment it might be an 89 year old woman in Japan or a 2 year old boy in Kyrgyzstan. The rate of new membership in one's preferred search radius determines how fast their most compatible local partners are subject to change.

Starting at puberty, most humans begin to pine for that special someone who truly "gets them" – their other half. Someone more on their wavelength and with more true chemistry than any typical (supposed) Best Friend Forever. They instantly click, feel at home and let their hair down without fear of reprimand or disagreement. They tend to have many common interests and goals. They're two peas in a pod and they simply feel better when in each other's company.


Unbeknownst to them, that highly compatible person(s) is living just 2 blocks, 2 miles, or 2 cities away.... or however far it takes to reach that 3 to 5 friend-of-a-friend-of-a-friend connection distance proven by the social media companies. Even if they're of incompatible romantic age ranges, genders, sexual orientations, etc., because they're on the same wavelength and have no major friction factors they'll always enjoy each other's company.

Priced to be easily affordable by everyone on the planet!